While unusual the banana makes an impressive house pot plant. The banana you see on the right is a dwarf Cavendish variety and even when grown outside will only grow to around 3 meters. The banana is a corm that grows in the ground, when the corm and roots are restricted such as when grown in a pot, the plant grows smaller and produces less fruit. If left in the same pot each new shoot that comes out of the ground will be smaller than the last. This is precisely what has happened to this banana you see in this figure. The first shoot that grew from the corm hit the ceiling, but now many years later still in the same pot it only grows to about 1.5 meters. This banana is on the south side of the house and here in the southern hemisphere that means it does not receive much sunlight, despite this it grows very well and produces a bunch of bananas once every couple of years.

If you live in a place that is too cold to grow bananas outside I would recommend them as indoor pot plants. They surprisingly don't need much maintenance to survive.

The pot and saucer: 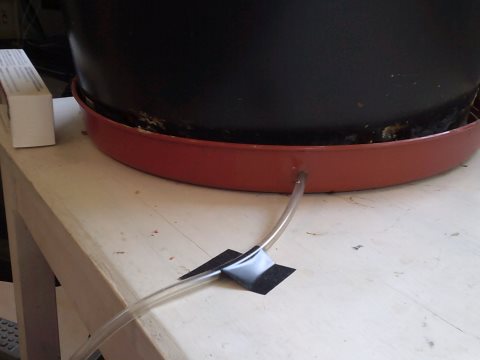 Drainage for round saucer

Get a shallow square pot with a large saucer. I have two indoor bananas one in a shallow square pot which is the one you see in the figure above and another one in a slightly narrower deeper circular pot; both pots are around 45 liters. I have found the shallow square pot far superior to the deeper round one. It is much easier to keep the soil of the square pot moist than the deeper round one. With the deep round pot the saucer maybe full but the soil can still be dry. In addition a shallow pot reduces the danger of overflowing the saucer. I also suspect that the square pot stops the roots from circling round allowing the corm to get bigger in addition to that bananas seem to want to spread rather than grow down.

Square shallow pots can be hard to come by so if you end up getting stuck with a tall round one you will need to remove the water in saucer so more water can be added to the soil to moisten it. My solution to this problem was using a small amount of tubing inserted into the saucer to allow the excess water to overflow into a reservoir; this can be seen in the figure on the right. 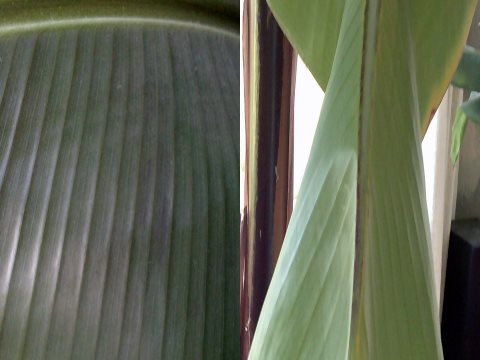 Bananas love food and water. Without water banana leaves droop down along there midribs and even when watered again don't bounce back again. For the square pot plant I water it whenever I see the saucer low on water which is usually about once a week. For the round one I have been watering it every day recently by using the reservoir water and topping up the reservoir when needed. Depending on the time of year they go through a few liters of water per week. When growing vigorously and supplied with plenty of water, the tips of new banana leaves can drip a little which might be a problem on carpeted floors if nothing is placed under them to catch the drips.

For food I feed them a 10.3.7 NPK liquid fertilizer which when neet is almost black in color. A healthy banana leaf has a very dark green color and is thick. I try to keep the water reasonably dark in consistency.

I have grown bananas outside in full sun, although they are hard to keep alive due to the long period of low temperatures we experience here every year, they don't seem to complain under direct sunlight. Indoors I have only grown them on the dark southside of the house where they receive very little direct sunlight and likewise they don't seem to complain. Therefore my conclusion is that bananas are capable of surviving both sunny and shady conditions very well. 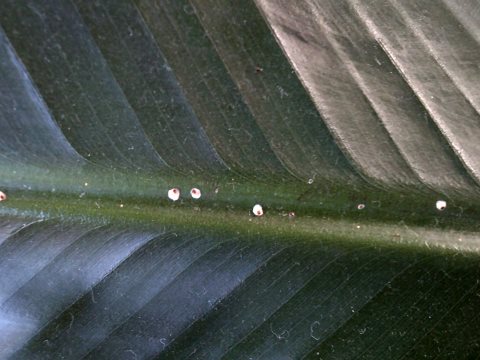 The only pest I have encountered so far is a scale creature. It originally came from a mango that I had growing inside which it promptly killed and then took hold on the bananas. It is not so fond of the bananas but left unchecked it can severely retard the growth and make the leaves die before their time. I have not been successful in entirely eradicating it but try to keep it in check when I remember. For control I wipe the leaves with a diluted solution of Neem tree oil; it smells for a few days but it's not too bad.

Cavendish is the usual eating banana you find in the supermarket. I would suggest a dwarf Cavendish. I have seen one variety of dwarf Cavendish for sale that reportedly only grows to 1 meter tall which I would like to try one of these days. Most if not all eating bananas are seedless and need to be grown from cuttings. I have only had experience of obtaining plants in New Zealand and for us the easiest way is simply to buy them on the Internet. Here in New Zealand the far north is warm enough to grow bananas comfortably outside and there are online nurseries that will sell them to you and courier the plants to your doorstep. 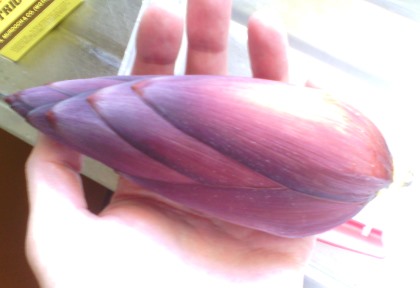 The most exciting time has got to be the fruit harvest. Bananas don't seem to have any concept of seasons, they just grow when the condition are right and slow down or stop when they are not. This means the fruit can appear at any time of the year. At some point rather than putting out a new leaf your banana will put out an inflorescence. It's usually purple in color and looks very odd, eventually growing downwards. Over a period of months the bracts of the inflorescence open up revealing first the female flowers and if still left on the plant finally the male flowers. The flowers themselves have a very unripe banana smell about them. What appears to be the stem of the female flowers fatten up and eventually form the banana fruit. It's a relatively quick process over a few months to produce fat green bananas. However, it takes a longer time for them to turn yellow. I have found my bananas take about six months to produce edible fruit after I see the inflorescence first appear. It's a good idea to get the bananas off the plant before they go yellow, as they tend to split if left to become yellow on the plant. I have found however this is very difficult because if you pick them too early they never ripen and the transition state between being green and yellow takes only a matter of days. If you do leave them on the plant to get yellow it's not the end of the world, you might have a few split ones which turn brown along the split where they have been exposed to air but that's about it. As they all turn yellow about the same time, you need to eat them all within a few days. The bananas that I have had of my plant have all been very tasty. 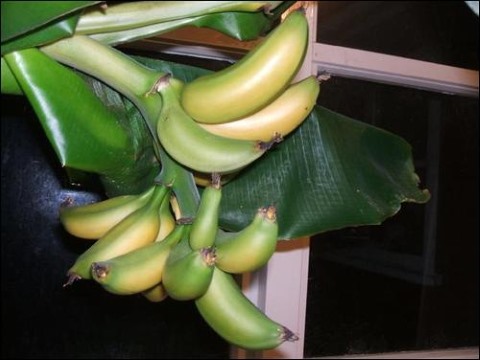 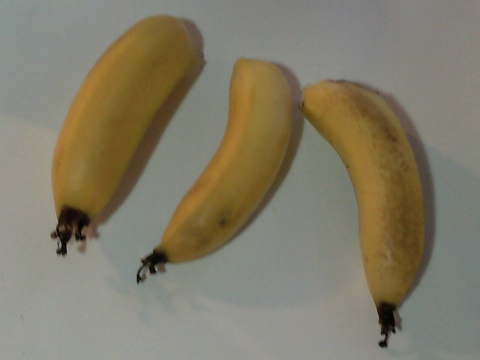